A moon on SpaceDestiny is comparable to a terrestrial moon, as it orbits around a planet. To get a moon, a huge battle needs to happen near the planet, so that at the end of the battle a debris field is formed. There is a slight chance that these dispersed debris pack into a solid satellite, smaller than a planet. That satellite is called a moon.

Having a moon is essential for every player wanting to move and act quickly through different galaxies, thanks to specific buildings such as the phalax sensor and the jumpgate.

A moon can be created the natural way, which is when a fleet is destroyed i the orbit of the planet. But, unfortunately, it dos not work every time !

The best way of creating a moon is building 34 cruisers. A debris field composed of 34 crushed cruisers gives you a 10% of getting a moon, by limiting the cost (it would cost more with light fighters, etc…)

The player who wants a moon will obviously need a defense and/or a fleet strong enough to destroy entirely the attacking fleet (the 34 cruisuers). If needed, you can always ask a friend to make his fleet stand on your planet in order to complete your defense and limit the losses.

At the end of the battle report there is a message indicating the formation of a moon or not.

Buying a moon with dark matter

Buildings on the moon

These are the buildings you can build on a moon :

Rhenium, selenium and nitrogen storages are useless as you cannot build any mines, therefore you cannot produce anything. This also makes the nitrogen power plant useless, as no energy is needed.

The moon base is the first thing to build. Your moon does not have any atmosphere, the base is then nece ssary to begin colonization. Your moon will only have one field at first. Developping your moon base will get that number higher (each level gives you three more fields).

The moon base gets quickly very exepensive. Use the fields with precaution.

NB: The defense on your moon will be protected by your interceptors (defensive missiles of your atmosphere).

What is the Phalanx sensor made for ?

The sensor allows you to see other fleet movements :

How does it work ?

Once you've developped the first level of your Phalanx sensor (1), you'll have access to a new “Phalanx” tab (3) by clincking on the planet you want to phalanx (via the galaxy view) (2). 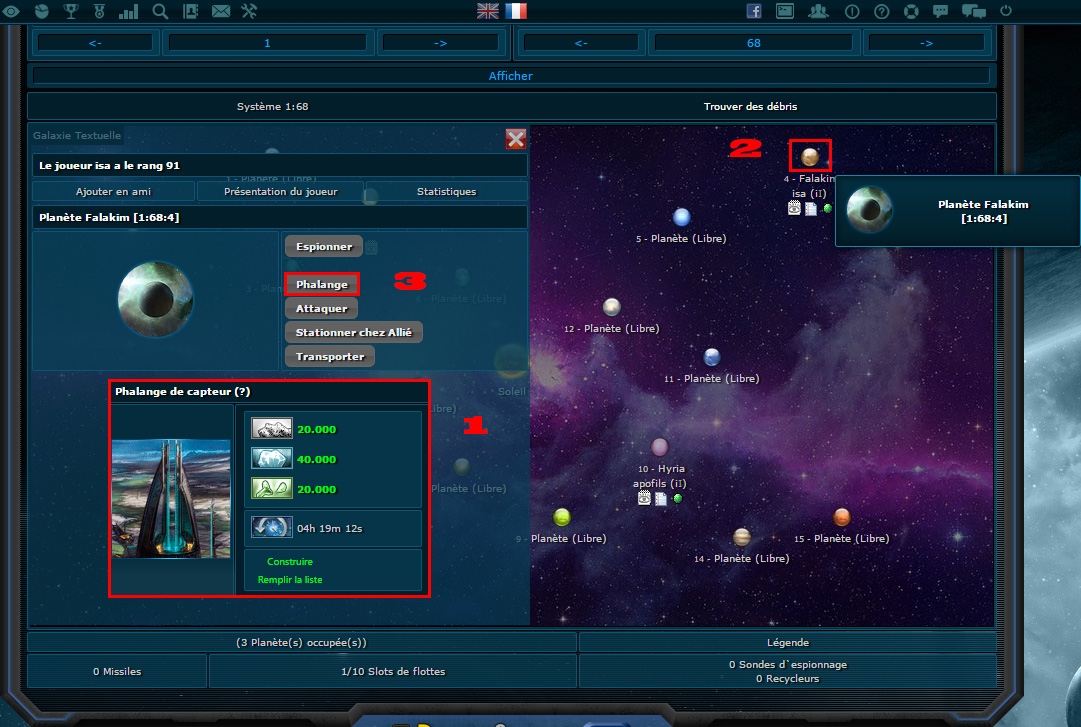 Once you've done it, a pop-up page will open itself, giving you access to the fleet movements and the time of arrival of the fleets. 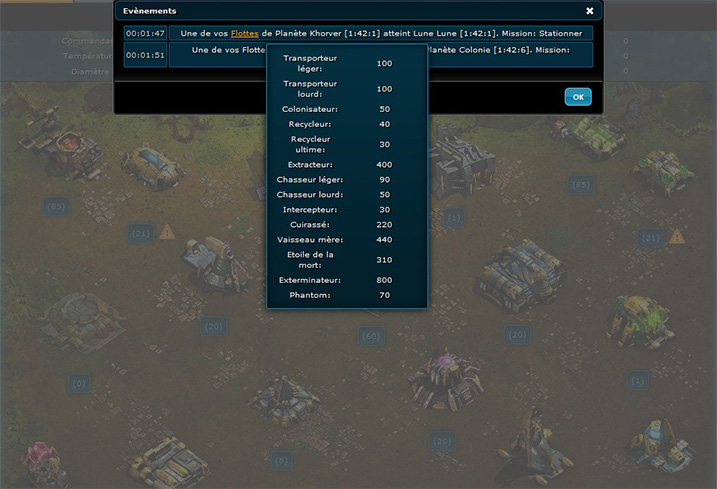 How many solar systems can it cover ?

A simple formula will allow you to calculate your sensor's range, regarding his level :

N.B: A level 1 phalanx will allow to see only 1 solar sytem away from your moon.

What can I do with a jumpgate ?

With a jumpgate you can make your fleet jump from a moon to another in a second. Obviously, both of your moons have to be equipped with jumpgates. The travel does not cost anything. 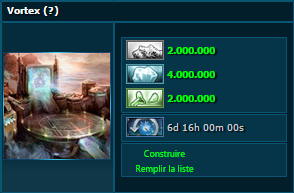 How does it work ?

After developping the first level of your jumpgate on two different moons, you'll just have to click on the jumpgate on you building view : 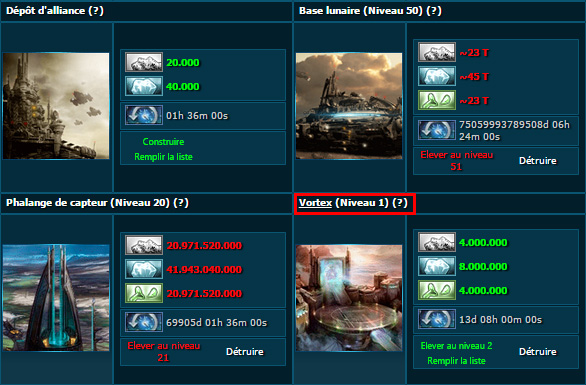 A pop-up page will open and two options will appear to you. Two choices then have to be made : the arrival moon (1) and the ships you choose to send on it (2). Then, click on “jump”. 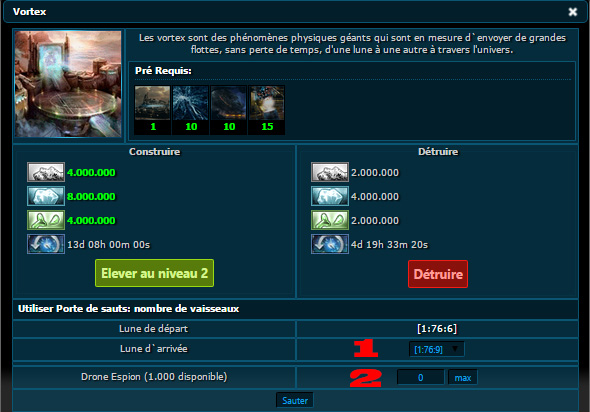 ATTENTION : you cannot transport resources with the jumpgate. Jumpgate carers have a strict “no food/ships only” policy.

As you know, once you've used your jumpgate, you'll need to wait an hour before being able to use it again. Increasing the level of your jumpgate will not reduce that time.

Destroying a moon is quite simple, even if a part of luck is always involved. In your galaxy view, or directly via you fleet menu, select the moon to destroy. 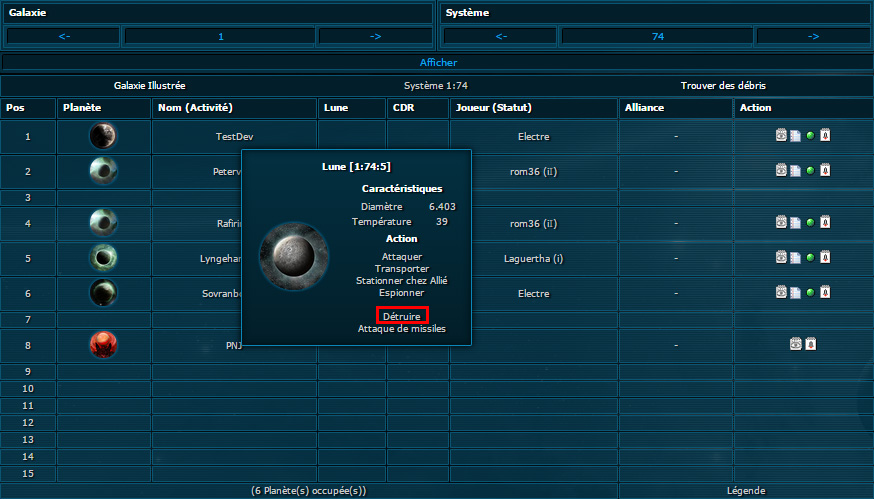 What do I need to destroy it ?

To take a moon down to ashes, you'll need 10 Battle Fortresses. Beware, it is not a straight win. There are three possible outcomes : 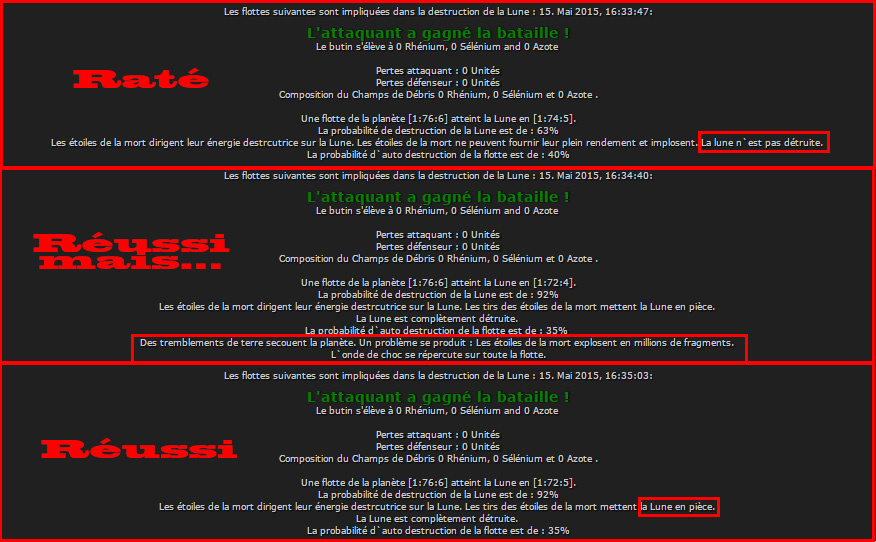